About the JBL Quantum ONE 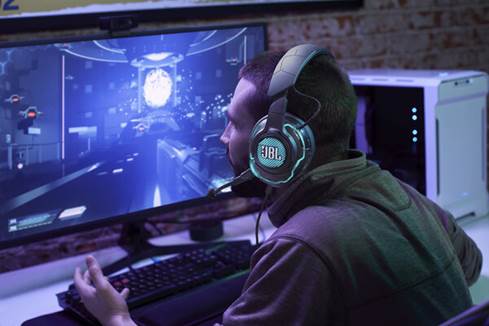 When video games cross over from a time-consuming habit to lucrative career, the true professionals start taking their gear more seriously. That's where the JBL Quantum ONE headset comes in — the statement piece of the company's new line of gaming headphones. This ambitious headset features high-grade 50mm drivers under the hood, along with a 3D surround sound technology that can track the movement of your head.

Active noise cancellation helps remove external distractions. And game soundtracks have clarity, power, nuance, and realistic sense of space. After all, the most advanced players rely on the directional and spatial cues they hear as much as what they see on-screen.

What sets the ONE apart from the other Quantum headphones is JBL's QuantumSPHERE 360° technology. Inside the headphones, there's a gyroscope that constantly tracks the position of your head. As you lean or turn your head, the sound field stays fixed and centered.

From there, you can hear the exact positioning of approaching footsteps, the distinct sounds of different weapons, and all the other important sonic cues. It's no longer as if you're wearing headphones — more like you're smack in the middle of the game's soundscape. Almost the audio equivalent of a visual virtual reality experience. 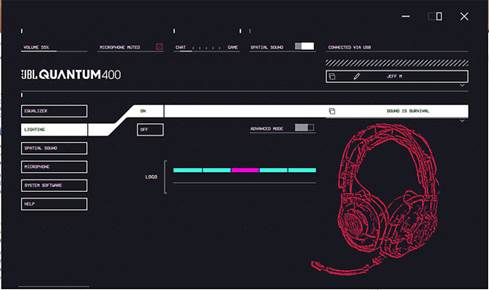 The Windows PC app gave control of everything from the surround sound to the pattern of the headset's multi-color LED lights.

You gain access to the headtracking and surround sound processing — plus a suite full of cool customization features — by downloading the QuantumENGINE software to your Windows PC.

Wired connection to your PC or console game controller

You'll need to connect to your PC via the provided USB-A adapter cable to take advantage of the QuantumENGINE software — and the surround sound processing. This cable is over four feet long, so it gives you some extra slack. And it feels nice and durable thanks to the woven-fabric covering. 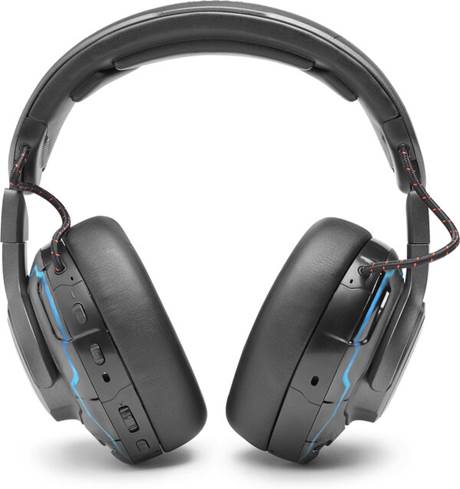 The leather ear pads and headband padding are both filled with thick memory foam for a secure, well-cushioned fit.

That adapter attaches to another cable terminated by a 3.5mm miniplug. So you can also connect to the headphone jack at the bottom of your Xbox ONE or PS4 controller (and some third-party Nintendo Switch controllers) for two-channel sound. You should be able to make the same type of connection on the forthcoming Xbox Series X and PlayStation 5 controllers, based on the specs released by those companies.

JBL's special headphone sound signature has been honed by years and years of research and exhaustive user testing.  It's helped them develop a sound profile that's been proven to satisfy most listeners — and gamers.

Gamers often end up wearing headphones for even longer stretches than we serious music listeners. So JBL added an thick layer of soft memory-foam padding to the Quantum ONEs earcups and headband. They are larger and heavier than most gaming headphones, but the weight is distributed evenly.

You'll find a game/chat balance dial on the USB-C to USB-A cable. It gives you quick and easy control over the audio mix for multi-player games. It is certified for use with DISCORD, and compatible with other chat software including TeamSpeak.

On the left earcup, there's a raised volume dial that's easy to find with your finger. The detachable directional microphone is tuned to pick up voices for clear-sounding chat. You can quickly mute the mic by pushing the dedicated button below the volume dial.